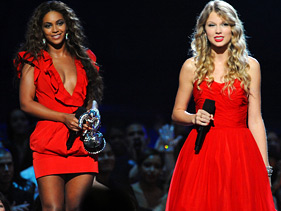 Big sister Beyoncé (winner of the video of the year award) stood up for her younger sibling in the singing sisterhood at last night’s Video Music Awards – giving Taylor Swift (winner for best female video) the chance to finish her acceptance speech interrupted by Kanyé West earlier that evening, and comparing Taylor to her own younger self at the VMA’s at 17.

Here’s how it happened:
Kanyé interrupts

Beyoncé doesn’t just talk sisterhood here, she sings it as well, using her platform to look hard at modern love. Her winning song Single Ladies makes a case for marriage and commitment in a world where 39% of US babies are born to unmarried women, asking both the single ladies and gents in her audience to think it over.

After Taylor’s quick costume change between her two “moments,” the two stars do look a lot alike.

Here are the songs the sisters won for:
Single Ladies (Put a Ring on It)
You Belong with Me