The blog has been down for a few months, but the glitches are fixed!  Here’s a quick catch-up op-ed from a month back that looks at the economic and workforce fallout of restrictive access to fertility control, via abortion or contraception. Lots of factors in play, all of them affecting and affected by the way women can contribute to workforce.  Over the next few months, we’ll get to see how the hand we’ve dealt plays out for women, families and employers. 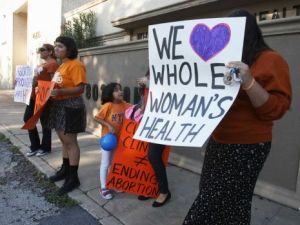 Fertility policy (regulating sex education and access to contraception and abortion) affects every aspect of life and business. It determines who’s here and in what circumstances. It affects the age at which a woman has children, which in turn affects her and her partner’s education levels and how they can contribute to the state’s workforce.

Until Tuesday’s 13th-hour Supreme Court intervention to temporarily halt enforcement of the bill, HB2, the 2013 Texas law limiting access to abortion had closed 80 percent of the 41 clinics where poor women in Texas went for abortions when needed, and for birth control, well-woman exams and cancer screenings. Thirteen of those closed may now reopen until the appeal is heard, but more than 20 will remain closed. Funding for women’s health services was also slashed in 2011, and partially reinstated in 2013. Republicans’ refusal of Medicaid expansion denies more than 500,000 women access to contraception and basic medical care.

All of those affected are poor and most are Hispanic or black. Middle-class types have private doctors for routine care and can leave the state if they need an abortion. Looking not at rhetoric but at results, it’s clear this legislation is all about keeping people poor by getting them pregnant.

One estimate predicts that if the law is allowed to stand, 24,000 additional babies will be born in 2014 and 2015 due to the cuts, at a cost of $100 million to the state (which won’t fund prevention but instead pays half the cost of each delivery via Medicaid). We’re paying to force people to have kids they don’t want.

Teen parenthood is a particular problem in Texas. It doesn’t just produce poor babies, it produces cheap laborers in the new parents who drop out to support their kids, locking whole families into lifetimes of poverty. They don’t graduate or go on to college, and the business community loses the educated workforce needed to do 21st-century business.

The Texas teen birthrate (44.4 per 1,000 women in 2012) is 50 percent above the overall U.S. rate (29.4 per 1,000 women) – and more than triple New Hampshire’s rate of 13.8 per 1,000 women. Texas’ teen pregnancy rate ranks fifth nationally – right below Arkansas, Mississippi, New Mexico and Oklahoma. Like Texas, three of those states limit abortion and (effectively) birth control access, while providing either no or misleading sex education. Like Texas, these states also have high percentages of impoverished residents.

Texas also has residents who are better off financially. Sometimes it’s suggested that wealthier folks’ success depends on keeping some people poor, as when cheap labor and low regulation are referenced as making the state attractive to employers. But the view of impoverished workers as a state resource is short-sighted. An unskilled wage pool attracts only low-level jobs. Tomorrow’s jobs, and those that will sustain Texas’ robust economy, will require educated workers.

Diminished access to birth control has been described as “collateral damage” of the anti-abortion push. But when “anti-abortionists” don’t care that this actually raises both the number of abortions and births, you question that analysis. Are the unplanned births the real point? Cynically, anti-abortion policies do three jobs for conservative legislators: Advocating the legislation brings out conservative voters. Added births expand population, increasing block grants and the number of the state’s congressional seats. As we saw in the last redistricting process, gerrymandering means elected officials needn’t represent the new citizens’ interests. Lastly, the births make new parents available for multiple low-wage jobs but too busy (or disaffected) to vote. This “conservative” vision maintains the worst aspects of the past. But it does nothing to grow the economy of tomorrow.

Current state laws that threaten abortion clinics dangerously and erroneously claim that patients are made safer by requiring the facilities to meet expensive criteria for “ambulatory surgical centers” or requiring that doctors get admitting privileges from local hospitals. Abortions in regulated clinics are very safe, and without clinics nearby, women resort to actually dangerous self-induced miscarriages. Where there are no safety problems, there is no need for a safety “solution.” This emperor is not only naked, but ugly and radically mean.

When laws enshrine an assumption of women’s incompetence to make their own constitutionally protected reproductive decisions, and require that they undergo medically unnecessary, intrusive procedures before they can have an abortion, the status of all Texas women, rich and poor, is undermined.

Poverty in the richest nation in the world is a social illness caused by policy choices. Who makes those choices? The people we elect to public office – something to consider as early voting starts tomorrow.

Where do the candidates you plan to vote for stand? Will they trust women’s self-determination and grow our human capital through education and health investments that produce good jobs?

Or do they advocate punitive policies that will keep Texans poor and ensure a bleak future for the state?

If business people have hopes for long-term prosperity, we have to stop sacrificing Texas women. Support the candidates who will protect the rights of all Texans, male and female, and make Texas an economic powerhouse for decades to come.

Gregory, of Houston, is author of “Ready: Why Women Are Embracing the New Later Motherhood.”