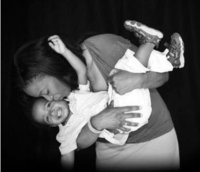 Hi there again!
As you may recall, one of my favorite research corners in the mother-hood is birth timing, and especially the wide social effects that delay of kids (via birth control) creates. My book Ready: Why Women Are Embracing the New Later Motherhood explores that phenom through individual stories and through lots of data analysis.

Though new later moms are proliferating rapidly (in 2008 while the birthrate in all other age categories fell 2%, it rose 4% among women 40 and over), there’s still a disconnect between our older faces and the common idea of what the mothers of young kids look like, especially in media images.

So when Cyma Shapiro contacted me about her project to document the faces of later moms and their kids — to represent for the world what later moms look like in their relationships, I was excited and happy to support. The result of all her hard work is the new show NURTURE: Stories of New Midlife Mothers, which pairs great images (by photographers Shana Sureck and Tracy Cianflone) with the first-person stories of how those families were formed. In their own ways, these are radical images — of mothers who have kids at 40 and over, sometimes a first child, sometimes a second generation family. The show opens in Hartford on November 4th, and will travel after that. You can contact Cyma if you’re interested in bringing the show to your town. And she’s got a Midlife Mothers fan page on facebook. Congratulations Cyma on a beautiful exhibition. At last!