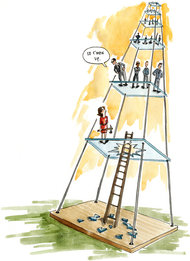 Here’s a great piece by Stephanie Coontz in today’s NY Times correcting recent claims of the imminent disappearance of men from the national economy.   This follows on the heels of related excellent points made in the Sunday Times’s review of Hanna Rosin’s book The End of Men in last week’s Times (by Jennifer Homans) and Philip Cohen’s multiple posts on the topic on his blog Family Inequality.

The basic point in these discussions is that women are still nowhere near equal in salary or in cultural power to men, though we have made some advances.  The claim to dominance is based in a misuse of sociological data.  As Coontz puts it:

“Proponents of the ‘women as the richer sex’ scenario often note that in several metropolitan areas, never-married childless women in their 20s now earn more, on average, than their male age-mates.But this is because of the demographic anomaly that such areas have exceptionally large percentages of highly educated single white women and young, poorly educated, low-wage Latino men. Earning more than a man with less education is not the same as earning as much as an equally educated man.”

Without this apples-to-oranges comparison, the argument that childless women in their 20s are now doing better than childless men in their 20s disappears, and of course it never  even tried to address what happens to women’s wages when women have kids.  Or are the proponents of the equal-wages-are-here theory anticipating that these women just won’t (and shouldn’t) ever have kids?  Strange logic.

I’d like to add two elements to this discussion — briefly, for further discussion later.

Later Motherhood: The delayed birth trend indicates the failure of the work system to admit women unless they employ delay as a workaround.  The increase in the trend is a marker, indicating the continued unfriendliness of the system to people caring for families.  The trend has allowed a progress up the career and pay ladders for women, but it cannot indicate a dominance, since if women were anywhere close to dominant, they would have changed the system to something friendlier to women long ago.   That has not happened yet.  And a fairer system, if achieved, would not per se indicate dominance, but something closer to equity.  Why does even an approach to equity look like dominance to some?  Not a feminist argument, more an argument meant to sell books and magazines by provoking anxiety about change .

The trend to delaying kids has developed in large part because women have recognized that they are only NOT PUNISHED (in terms of long term salary and social power), if they delay.   NOT PUNISHED (and it might be better stated as “not punished as much“) is not the same as dominant, but that’s the way it’s being discussed.  This argument potentially undermines further progress by creating a false impression that women advance at men’s expense, and that they have in fact already done that.  As Cohen puts it, “woe to any woman trying to convince a jury she’s being discriminated against while these books are in the headlines.” Rather than representing a loss for men, gains in equitable treatment for women represent a win for the nation across the board, since higher female paychecks add to the revenue of the family as a whole and female workforce participation in a wider range of jobs means an expanded national resource pool.

The Anti-Birth Control Movement: The recent coordinated push to limit access to birth control and abortion in state legislatures across the country represents an effort to push-back against feminist gains.  Though women have far to go to equity, the progress we have made in putting more women in policy-making roles seems to be scaring some old-boy employers, who don’t like change that could mean a change in their chokehold on policy or on the current unfair wage system.  More later, but I did want to note that non-fact-based anti-feminist East Coast journalism on “female dominance” plays to the same fears that seem to be motivating the anti-birth-control push, though presumably with a different sector of the national audience in mind.