[Related discussion: here’s a link to an interview I did on momlogic.com about the RISE in birth rate for women 40+ in 2008, while the rates for everyone else fell.]

At the other end of the age spectrum, births to teens were down 2% after a two-year rise in 2006 and 2007 that broke the 14-year decline in teen births in the years prior. 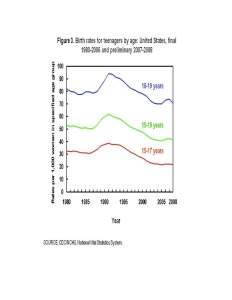 Here’s a Pew Research article on the recession effect.

Other possible dynamics in play? The drop may have something to do also with recognition as the teen rate rose in 2006 and 2007 of problems with Ab-only ed — and moves in a number of states away from that.

Likewise, all the additional people who had babies in 2007 (that rise occurred in all age brackets except those 45+ and those 14 and under) were busy in 2008 — taking care of those kids.   Demand in the baby realm is not infinite.

On the other hand, recession-based decisions against a baby today among folks who would have otherwise felt ready, will lead to further increases in births to older moms (and dads) down the line.  Lots of ripple effects to all these social dynamics.

2 thoughts on “Recession as Birth Control? Varies by Age.”