[An earlier version of this post called the 2010 fertility an all-time low, based on figures originally published in the annual CDC reports. Revised figures published in 2003 (NVSR 54, no.2, p. 29) suggest that there’s still a way to go before the fertility rate reaches the updated all-time low, which was 63.6 in 1997. This post has been altered to reflect the updated figures.]

The report was short, since it is provisional, including no details about the ages of the women involved in these births. The full preliminary report, with more details, will not be out for months. Final reports generally come out about a year after the preliminary data.

You may recall that last year we had stories telling us that the BIRTH rate had fallen to an all time low – and I wrote a piece all about how the birth rate was not telling us that women were having kids at an all-time low level — it’s the fertility rate that tells us that. Instead the birth rate was going down in part because it tells you how many births there were per people in the whole population, and since people are living longer, and those old folks don’t have babies (or very few), there were fewer births per thousand.

The fertility rate was going down too in 2009 however – just not to record lows. And it’s still declining. 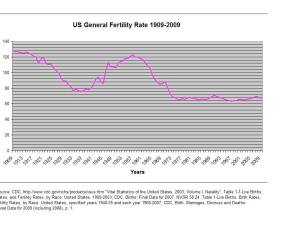