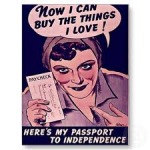 The economic roots to the ongoing trend to delaying motherhood have become only more clear in the recent recession.  But economics has been a motivating factor all along, since the 1960s when the trend began.  (Numbers of first births to women 35 and over started rising in the 70s, but the trend began when those same women refrained from earlier births in the 60s.)

A 2011 study by Amalia Miller on compensation (based on a pool of women who first gave birth between ages 20 and 34) indicates that women with college degrees go on to gain 5 percent in wages per year of delay on average, and 12 percent or more in earnings per year of delay.*

The difference between wages and earning comes from expanded hours on the job—delayers can work full time before kids and maintain that schedule once kids arrive because they can at that point afford good childcare.  Thus, if you are 18 and childless, go to college, graduate at 22, go to work, then have a child at 25, you will make about 36 percent more per year from there on than you would have made if you had had that child upon graduation.

If you delay till age 30, the average age when female college grads have their first child (for male college grads, it’s 32), you will make roughly 96 percent more across your career than your younger-mom, college-grad self.  And so on, increasing with each year of delay.

College grads get special benefit because going to college in itself provides women with part of the boost in wages, based on training and new eligibility for better paid professions.  The rest of the boost comes from concentrated time put in on the job, which is easier without kids in a context of limited affordable childcare and employer bias against mothers.

Though economists can now demonstrate that delay links to higher earnings and other benefits, for decades prior steadily increasing numbers of working women have been figuring that out without benefit of experts, through deduction, happenstance, and attention to one another’s examples, as they’ve negotiated the still-shifting world of work in our post-birth control world.

Current anti-contraception politics would have strong economic and political effects, since limiting women’s ability to control their fertility means lowering their wages and their political clout.

*“The Effects of Motherhood Timing on Career Path,” Journal of Population Economics 24, no. 3 (July 2011): 1071-1100.  Miller’s article documents that the overall wage gain to all women averages out to 3 percent per year of delay, but  notes that the gain is realized only by college grads.  When calculated for the smaller pool of college graduates only, she finds a 5 percent wage gain, and confirms via email to the author a concomitant earnings gain of roughly 12 percent.

–Based on material from READY: Why Women Are Embracing the New Later Motherhood (Basic Books, 2012), pp. xv-xvi.