Women’s work takes many forms–including poetry, which advances the life struggles it carves sense from. 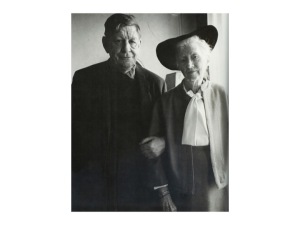 Modernist Marianne Moore (1887-1972) excelled in this labor, innovating early and late, ever ready for the battles fought both at home, abroad, and in the bookstores, both fierce and playful (see “Roses Only,” “Marriage,” “The Fish,” “Silence” “In Distrust of Merits,” “Armor’s Undermining Modesty,”  “Combat Cultural,” & “To a Giraffe” for a few examples).  At once “the most high-brow poet in the world” per critic Richard Aldington, and a writer “in plain American which cats and dogs can read!” per herself.

Here’s a favorite (from 1921), for friends in Moore’s old west village neighborhood, recently dark and wet:

accreted where we need the space for commerce–

the centre of the wholesale fur trade,

starred with tepees of ermine and peopled with foxes,

the long guard-hairs waving two inches beyond the body of the pelt;

the ground dotted with deer-skins–white with white spots

“as satin needlework in a single color may carry a varied pattern,”

and wilting eagles’ down compacted by the wind;

and picardels of beaver skin; white ones alert with snow.

It is a far cry form the “queen full of jewels”

and the beau with the muff,

from the gilt coach shaped like a perfume bottle,

to the conjunction of the Monongahela and the Allegheny,

and the scholastic philosophy of the wilderness

to combat which one must stand outside and laugh

since to go in is to be lost.

It is not the dime-novel exterior,

Niagara Falls, the calico horses and the war canoe;

one would rather be without it–”

that estimated in raw meat and berries, we could feed the universe;

it is not the atmosphere of ingenuity,

the otter, the beaver, the puma skins

it is not the plunder,

it is the “accessibility to experience.”

For lots more on Moore, check out http://moore123.com/