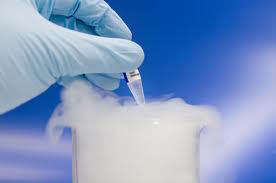 For egg freezing, a new procedure, there’s limited success rate data available because few of those who’ve frozen their eggs have come back to have them fertilized and implanted, but here’s a link to an info and advocacy website called Eggsurance.

To track annual success rates on IVF attempts by age (with non-donor eggs) and overall (with donor eggs), go to the National Summaries on the CDC ART (Assisted Reproductive Technologies) site.

They give you some helpful info, but it’s broken down by the number of cycles, not by the numbers of people involved (so you can’t tell when a person is attempting several times, or what proportion of the set of people trying end up with a live birth).

Success rates for women working with their own eggs are broken down by age, but not the rates for women working with donor eggs — because “patient age does not materially affect success with donor eggs.”  The drawback there is that you don’t see what numbers of women in each age range are attempting egg donation — but I assume the majority are over 40 (let me know why if you presume otherwise). 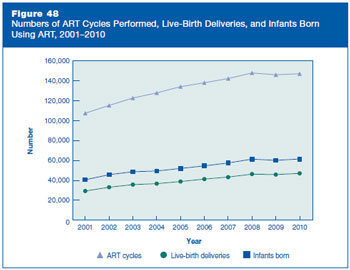 While the success rates for these technologies have improved over time overall, especially for younger women, the numbers of attempts and of births declined between 2008 and 2009, along with the total number of US births, but have resumed their rise since then. (Chart data.)

Pools of attempters are limited to people encouraged (or allowed) by their doctors to proceed (so again, it’s people having issues with fertility, but not too many, so it’s not the set of all people), as well as by funds available.