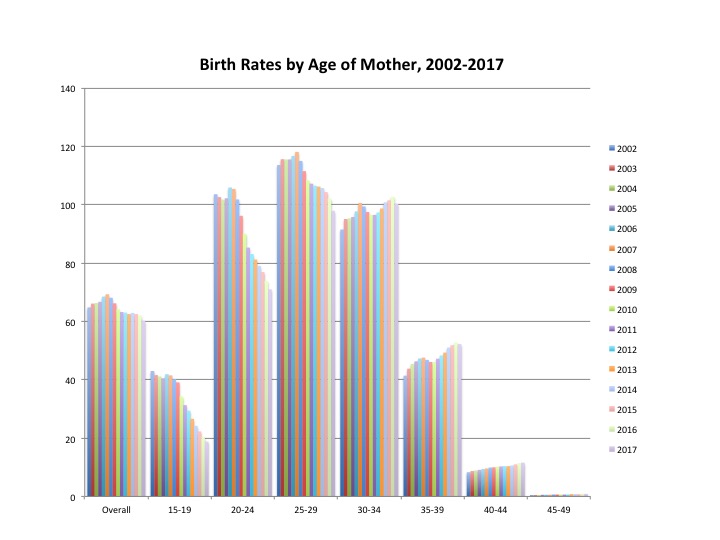 What does it mean for a country when nobody (or a fast declining number) is having kids?

Most clearly it means a smaller workforce on the horizon (especially when combined with cuts to immigration), which could be good if that workforce is super-efficient and augmented by robots and computers. Not so good if you’re looking to support a big group of retirees on the social security payments of the new few, or if you want those few to provide care for the retirees or to grow the economy through ongoing purchases (which has historically included things related to family building, like diapers, kid clothes, strollers and houses).

The current pattern of decline began with the recession in 2008, but has continued beyond that.  The usual suspects in the causal side have been: lack of a support infrastructure for families, which means people feel they can’t afford kids until later and IMPROVED birth control. More reliable birth control especially explains the drop among women in their teens and early twenties, since about 45% of US pregnancies were unintended in 2011 (58% of which ended in a birth), with women 15-24 having the highest rates of unintended pregnancies.  Long Acting Reversible Contraceptives are radically changing that dynamic.

The continued decline among young women would seem to reflect decisions to delay in order to have more time and money to invest in their own educations and career starts if they aren’t caring for kids. But the birth rates among women in their 30s were rising since the end of the recession, so why the sudden reversal there?

Is there a Trump effect — or other shock factor introduced since the end of 2016 — that might explain the swerve in the pattern in 2017?  Are women (and their partners) more worried than formerly about things like maintaining their career paths and salary trajectories (often sidetracked by kids), about the overall economy, about the lack of a social support infrastructure for women who are mothers, about seeking to include women’s voices in civic and business policy making (also often sidetracked by kids), about robots taking the jobs of tomorrow, about the threat of nuclear war, or that climate will change the human future radically for the worse? Variously strong issues individually, as a group these could be overwhelming for young people trying to plan ahead.

The NY Times ran a story yesterday on the endemic US workplace bias against mothers, urging women to start a #momstoo anti-bias movement. This movement could get a platform through the birth rate decline, which should open discussion of the pros and cons. If there’s interest among policy makers in raising the birth rates, finding ways to allow women to combine motherhood with active workforce and civic lives seems key–through programs like paid family leave; good, affordable childcare for all; pay equity for mothers; and school hours synchronous with the work day.

Another factor in the mix might be that we’re seeing people question their desire or need to have kids, which for ages (literally) have been the default effect of having sex, but are no longer.  And now that not having kids has become more socially acceptable, do families become less attractive, either per se or (again) due to the lack of social supports?  Over the years we’ll get to find out what people without kids find to do with all the time that people have historically spent with their relatives. Will it be work or play? –and will that make them more or less happy? Or are they all waiting to start families till they’re 40? Stay tuned for ongoing change.

One thought on “What’s Pushing Births to 30-Year Low, & Rates Down among All Ages Except 40+?”