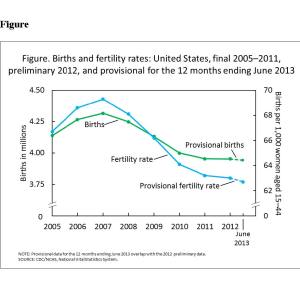 The fertility rate fell markedly between 2007 and 2010, tracking the economic downturn, and has continued to decline through June 2013, though at a slower rate, the CDC reports. Following up on its recent in-depth report on births and fertility rates through December 2012, the CDC released its snapshot of the first half of 2013 this week.  The fertility rate hit a new all time low in June 2013, at 62.7 births per thousand fertile women 15-44.  Actual births fell minimally, from 3,944,000 in the 12-month period ending in June 2012 to 3,941,000 for the 12-month period ending in June 2013 (contradicting one prediction that they would rise).

The snapshot does not give details on the ages of the women involved – so we must cool our heels waiting for news on whether the fall has continued to occur mostly among younger women, or not.  Stay tuned to track when and if an economic upswing moves more women family-ward, or if the lack of affordable childcare and the attractions of increased pay keep them on the b.c. for the long term.

Anybody else find it odd how the recent push to deny women birth control parallels the increased use thereof?  Is raising the birthrate part of the aim of the anti-birth-control faction, or would it be just a byproduct?

Another recent CDC report, comparing pregnancy rates and pregnancy outcomes across several decades, indicates that the rate of abortions fell almost continuously between 1990 and 2009 (latest data)  — indicating that some combination of birth control and abstinence was active in the recent decline in births and in fertility rates.