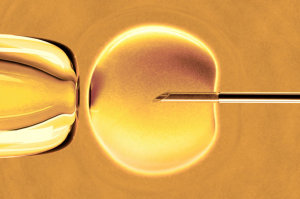 Here’s a recent story from the New York Times about the ethics of mixing the genes of multiple (more than 2) parents to form one child, through cytoplasmic transfer. In this case the point is to replace genes that would lead to illness with healthy genes from a donor, but otherwise to pass on the healthy genes of the intentional parents. This story is just a tip of the iceberg of debates over the ethics of fertility intervention to come in the next decade and onward.

Like all roads to parenthood that involve third (or more) parties, gene mixing pushes the barriers of familiar structures and raises existential questions about who we are.  By expanding the set of parents as we’ve done of late to include sperm and egg donors, surrogates, adoptive, foster, step and birth parents, and now individual gene donors, we widen our vision of family.

While the immediate effect is to include the a few more people in our individual relationship sets, the ripple effect can intensify our sense of our links to all our fellow humans – and even beyond.  By reminding us that we are made of sharable materials that have been recycled and repurposed around the globe and across eons, this kind of innovation can raise consciousness of our connections to ancestors as well as to our “unrelated” contemporaries.  At the same time such innovation can shift our thinking from the anthrocentric to the anthrodecentric, reminding us of our status as precipitates of the core entity Earth, to the ecology of which we contribute in ways we understand in only small degree.

This melting of familial barriers through mixed parentage at molecular and affective levels works in ways similar to the ongoing processes of social acceptance of “race” mixing (a process that’s occurred both willingly and by force whenever members of different “races” have shared spaces, but which has not always been acknowledged or respected). These discussions are always shadowed by the distorted use of the term race to distinguish by color among members of the single human race. There are many ways to go with these parallels.

Technological advances like cytoplasmic transfer are a form of evolution — externalized. Externalized evolution operates in the same experimental way as the internalized kind but it can have wide effect over a much shorter time span if doctors implement change in many patients. This kind of evolution is not unnatural, since it is also the product of the human organism, but rather than being accidental, it’s the intentional product of human decision makers enabled by advances in technology. Technology (or tool) use being, after all, an emblematic human quality.

Of course, where problematic genetic mutations that occur by accident are generally quickly excluded from the set of those passed on in the internal evolution model, there’s a much higher risk of errors being passed on to many via external means. Since it may take a while for innovations to express their problematic aspects, the difference in speed of application offers the possibility of both enormous benefit and enormous loss. While human evolution played out over millions of years, humans in possession of not just language but writing (a game-changer among tools) have only been around for about 4,000 years, enabling an enormous speed up in our technological advances through shared focus of many people on solving problems (like a huge group of linked computers). This speed up qualitatively changes the experimental nature of evolution–hence the ethical questions. Can we presume to know enough about the effects of an intervention to apply it widely, without having actually seen the longterm sequelae in even a few cases?

Lots more discussion of all these interconnected issues to come, quickly. And, as ever, fertility dynamics are core issues.

This post was substantially revised and expanded on Dec. 18, 2013.