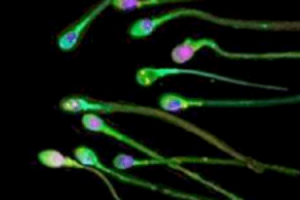 WBUR On Point panel on this topic: Shulevitz, Gregory, Aronowitz.

Judith Shulevitz’s recent New Republic essay on how later parenthood is “upending American society” claims that delaying kids could lead us down a rabbit hole of genetic decline. The piece gathers much of its energy from new studies suggesting that male sperm quality decays with age.

While female infertility is old news (literally), issues with male fertility create a new cultural frisson. Apparently, genetic errors may be introduced into sperm every time they divide—which is often.* So the children of some older men may have issues, cognitive and physical, that the kids of younger men don’t generally face (at least not due to their dad’s contribution to their DNA).

There’s a lot of emphasis on the word “may” in the New Republic piece—since most of the evidence it’s based on is inconclusive. And there’s a strong element of anecdote as well. Fertility catastrophizing is an ongoing sport. For instance, here are some other fertility scaremongering pieces of the past few years which turned out to be not the big problems the headlines suggested: the ovarian reserve scare; the later-parenthood autism scare; the childlessness scare; earlier this month we had the low-birth-rate scare (which turns out to really be about young women delaying kids in order to establish themselves—a time-lag effect).

In the case of new dads over 50, several studies do suggest that their kids may have a higher rate of schizophrenia (about 1 percent) than those of younger dads (about 0.25 percent), and there may be links to other ailments. Time, and more completed studies, will tell. The same is true of studies of the effects of fertility treatments like Clomid on both kids and moms, which the essay also raises as potentially devolutionary. The data is still in the gathering stages.

As there has been all along, there’s reason to ask women and their doctors to think through their fertility options before turning to fertility tech and drugs. Firm data on rates of pregnancy in the late thirties and early forties is scarce, because doctors can’t mandate that a big group of people have unprotected sex constantly for the sake of an experiment. But one study indicates that most women not already known to have an endocrinal disorder or blockage will get pregnant without aid in their late thirties within two years. Many find two years too long a wait before seeking fertility boosters—and certainly it’s reasonable for women to get their hardware checked out early on in their fertility efforts, or even before they’re ready to start trying for kids. But of the 580,000 kids born in 2010 to women over age 35, only about 5 percent of them involved IVF.* (We can’t track how many involved Clomid or IUI.) For more on rates of decline click here.

Fertility treatments should be more regulated and tracked than they are. We know little about the long-term effects of the treatments we’re using on a wide scale. But the presentation of data in this essay is questionable. Potential problems should be noted and discussed, but there’s no basis for jumping to end-of-the-world conclusions. We are not falling off a fertility cliff.

Looking at the same question from the positive side, at least such hand wringing does open up discussion of these issues. Suggestions of declining quality of sperm among later dads shares out some of the weight that’s been jammed on the shoulders of later moms in our fertility discourse.

Different from older moms’ situation, however, these male fertility issues can be addressed with relative ease. For women, IVF and egg donation involve injections of high doses of hormones with unknown long-term effects, huge expense for each attempt, and ethical questions over the use of poorer women’s genetic material for the benefit of richer couples.

By comparison, for men worried about potential issues with their aging reproductive materials, arranging for sperm donation is a breeze. The cost is negligible and no risky hormone injections are required. If you want familial DNA connections, there’s the real option for many of using a nephew’s sperm—or that of a younger brother. Or if you don’t have such a handy relative, or it’s not a real option given your family dynamic but you do hope to propagate your own DNA—you can push for further research around generation of new sperm cells from an individual’s adult stem cells, skin cells or other tissue. If perfected, such advances could allow men (and, interestingly, women too!) to generate new sperm cells bearing their DNA. These would be free of the genetic errors that older sperm have, because they haven’t divided as often. Some animal experiments along these lines have been successful.

The understanding that spermatic dynamism fades with time may surprise us for a few minutes. But viewed in wider context, it’s not the end of the world, guys.

Modern fertility is changing at lightning speed, and along with it the stratification of tasks based on gender. Many of our old-world assumptions are being upended. But for women, men, families, and society, the new options introduced by control of fertility are largely positive and open the way to ongoing positive cultural evolution.

*More specifically, the sperm themselves do not divide – it’s the cells in the gonads that generate the sperm that divide, creating the possibility for potential genetic errors.