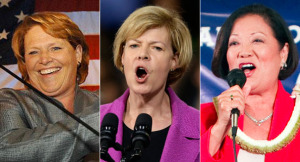 This past week I participated in two radio panels with Judith Schulevitz, whose recent New Republic essay spawned a lot of media response.  I have to say I’m getting less and less impressed with the world of media response–since it feeds us, and blows itself up with, similar catastrophe narratives around women’s control of our fertility practically every month, never noticing that there’s a pattern there. Over and over the stories turn out to be half truths or completely pointless, but they put the new ones out anyway.

I just posted a piece on RH Reality Check around one dynamic of Shulevitz’s piece (its big concern about the possibility that some older dads’ sperm may be suboptimal) relative to the ease of addressing that concern, should it prove to be a major issue (the science jury is still out on that, as it is on practically all of Shulevitz’s concerns). Not to say they shouldn’t be discussed – they should be, so that’s the positive side of the dynamic.  But no need to jump to end of the world conclusions. Will repost it here tomorrow. [here]

Schulevitz argues that later parenthood upends American society in negative ways, to do with possible genetic problems introduced by unregulated fertility treatments and the genetic errors that build up in the sperm of older dads over decades.  Down the line the children of older parents will be a lesser race, due to genetic problems introduced by delay, she suggests.  And the kids will lose their parents too soon (mid 30s to mid 40s)–especially problematic for adult kids with major ailments.

I of course agree that later parenthood upends things, but I see it as an overwhelmingly positive phenomenon in terms of the social dynamics of women’s participation in public life and in policy making that delay allows.  And it’s only because women have delayed kids or refrained from having them at all that we now have even a discussion of the possibility of a family friendly workplace — the condition that would allow women to delay less long.  Only because women have delayed is there the chance that later they won’t have to.  How much later we have to wait is in large part up to us at this point.  When does the group throw the TV (or the inequity) out the window and start yelling?

In the meantime, delay has been our form of silent protest of the status quo. Women have figured out that delaying their first child in order to finish their educations and to establish at work means that they make enormously more in salaries over the long term (12% annual gain in life time earnings per year of delay for college graduate women!).  This money and education then translate into expanded political and social influence that they would not get any other way.  It’s millions of women’s delay of family by a little or a lot that has brought us to the point where our issues are now at least being discussed in the public forum.  Not so much acted upon yet, and not always discussed very thoroughly (every time we bring up a national childcare system in a discussion people’s eyes glaze over and we’re told there’s no chance so why bother to discuss it).  But at least there’s a vocabulary of family friendliness now.  Baby steps, as it were.

Other benefits women have found in later motherhood (a quick recap of READY‘s findings ):

In my view, these effects are hugely more important than the possibility that some later dads in their 50s may be at risk for having kids with genetic problems (about 1%, up from 0.25% in their 20s), especially since this possibility now that it’s being identified can be addressed at low cost and limited trouble by sperm donation, either from a sperm bank, or if you’re concerned about perpetuating your DNA, then from a younger relative, or even potentially soon from other of your body’s cells that can be made to generate new, error-free sperm.

I think these issues also outweigh even the risk that the grandparents of the kids of delayed parents will be less energetic (another topic of Shulevitz’s emphasis), though there’s plenty of room for moving to address such concerns of families around too much delay by fixing the policy around women’s work in the USA.  Activism, ladies, activism.  History suggests that nobody else will do it for us.