What better state to play out reproductive political battles in than the only one named for a woman’s hymenal status. That’d be Virginia – named for the Virgin Queen, Elizabeth the First of England. 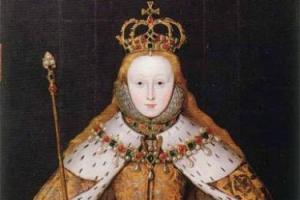 Funny, maybe, but more importantly a reminder that women’s access to direct power has long been linked to their ability to refrain from having … children. Whether or not QE 1 was sexually abstinent (it’s debated), her decision not to marry meant she had no master, no man to take the reign from her hands by assigning her to the world of childbearing. For most women, the fact that sex leads to children (and lots of them) has kept us busy, uneducated and out of decision-making circles for millennia. Reliable and effective birth control transformed the scene that had kept women in political and economic bondage. No wonder there’s pushback. But it’s too late.

Elizabeth was brought to power as a last resort—with no remaining male heir to carry forward her father’s DNA, she looked like a good chance to maintain the family line. But while she did that in herself, she stopped the onward flow of Henry’s genes by refusing to procreate. By practicing an early version of birth control.

With that refusal came a voice in government that she would not otherwise have had—a big voice. No one could forbid her access to her practice, because she was the state. But most women in her day were forced into marriage willy nilly, and little heard from in the public sphere.

Fast forward from 1558 to 2012. The recent rash of contra-contraceptive and anti-abortion efforts on the part of the right aims not just to deny women health care or a sex life, but to actively push us off the path to shared power we’ve been on for the past 150 or so years (since the invention of rubber). Denying young women contraceptives is not just anti-birth control, it’s a coercive pro-natalism, and, within the contemporary context, effectively a silencer.

Men and women have sex (generally together), this is a fact—some more, some less, and they start at different ages. But where in the past having a sex life often limited one’s options in life, especially for women, with birth-control it need not. An evolutionary change! Instead, women and men can delay their families while they go to school and establish at work, and then have kids if they want them within a context of financial stability and active desire to parent.

On the other hand, women denied contraception have more kids, and earlier. They are less likely to finish their degrees—in high school, college or beyond. In our family-unfriendly system, they’re less likely to climb the ladders at work. They won’t trickle up into policy-making roles. They don’t get a seat at the business table or in Congress, so they can’t voice their opinions in cultural debates in ways that will be heard. They can’t change the system to one that might be friendlier to families or that might require enforcement of equal pay laws. Instead men get those seats and that voice. We know what that looks like. 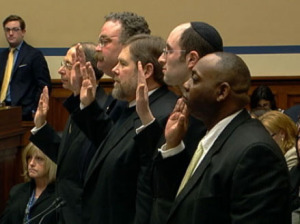 But this is not our world.

Yes, Congress is overwhelmingly male still, but that’s changing, and new assumptions rule. We have female representatives, and they are getting loud. Sandra Fluke, the student who dared protest the power grab portrayed in the panel photo, has been pilloried by “Slut” Limbaugh, notable for his loose ways with language & facts (turnabout’s fair play). Only a leftover from the hoary past could think that word, with its roots in Elizabethan kitchens, would resonate in the old shameful way in the ears of today. Now the condemnation is of him, as he has just grudgingly acknowledged. How much do these guys not understand about the change that has already occurred?! The world in which women depended on men to feed them while they raised the young and ran the house is over, as much as the throwbacks might wish it were not so and work to turn back the clock. That is not moralism; it’s sexism—plain and simple.

The crazy thing about these patriarchs struggling to hold on to the old ways is that they seem not to know how many of their fellow men benefit from birth control too. Not the priests, presumably, those male virgins with their own special access to power through childlessness. But the men who live and love with the women who take the Pill. Who also don’t want 12 kids in 20 years. Who don’t live on the pre-industrial farms where so many kids were once needed. Whose partners bring home a good wage and up the family opportunity level. Who like talking to their similarly educated wives and girl-friends.

Newsflash: it’s not 1558 or even 1958. A woman doesn’t have to be a virgin or a wife to be respected, any more than a man’s value as a citizen is defined by his sexual activity or marital status. Birth control not only allows individuals to make their own personal romantic choices, it serves the nation by giving women and men time to get an education before starting their families, so they can be the skilled workforce the nation needs. Birth control serves the national interest.

And, as of 91.5 years ago, all these female citizens can vote. As can their partners. Helpfully, these episodes are reminding us how important it is that we do so. Birth control has unraveled the social fabric that bound all but the very exceptional women with shackles of shame, violence and penury. There’s a way to go before we weave a pattern of full fairness, but there’s no going back. Good riddance. The queen is dead. Long live the enfranchised citizen.