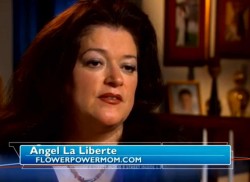 Here’s more discussion in the “how late is too late?” vein, on a show called Inside E Street. To watch the video, click here.
Is it 50, 60, 75 ….? And is it a different choice if you’re bearing a child via egg donation than if you’re adopting, or taking on the raising of your grandchild? The three people in those three roles may all be the same age — will they be judged differently?
The episode looks in on new-mom-at-51 Lynn Laszewski, as well as mom-in-her-40s Angel La Liberté (whose advocacy blog FlowerPowerMom serves as hub to the later moms community). They both seem to be doing a great job of parenting in the clips!
Bioethicist Bonnie Steinbock and I discuss the dynamics in the second half. I’m on the side of trusting people to get the facts and decide for themselves, with input from responsible (but not prejudiced) advisors and doctors. She doesn’t seem too far from that point of view either, but there’s a doctor with more concerns. See what you think!