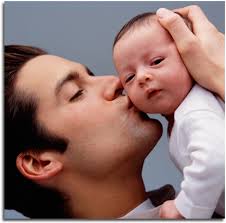 In this piece I suggest that lack of good, affordable childcare affects the rate at which fathers can participate in their children’s upbringing. Childcare (or its lack) is a pivot around which many other social effects turn. The requirement that we pay exorbitantly for it, even for middling or poor care (think Jessica Tata), affects the way that we form families today.

Back in the day, ties were the go-to gifts for Father’s Day. They were the sign of a breadwinner, a flag of adherence to the masculine ideal, within the strictly gendered work model of the times. Simultaneously, ties signaled a distance between a parent and his kids. Child care was women’s work, and children often didn’t know much about dad or his tastes, beyond reading the newspaper. What would dad like? We don’t know. Get him a tie.

Though “Mad Men” reminds us that model had plenty of problems, many dads did earn a family wage, and family structure was fairly stable. Lately, few workers make enough at one job to support a family, and family structures are in flux, in multiple and very basic ways. Some changes are positive, some far less so. Altogether, the flux means that many fathers need framework support to be the good dads they want to be, but our community infrastructure hasn’t caught up.

Among recent shifts: Births and marriages are at all-time lows, and parents have their first children later than ever. Women are major contributors to household incomes, which means that couples make decisions jointly and dads do more child-rearing. Dads today interact with their kids almost three times as much as dads in the 1960s, and their kids love it! Child well-being zooms when dads engage.

The proportion of kids born to unmarried parents has doubled (40.7 percent in 2011 from 18 percent in 1980). Though accepted, unwed parenthood comes with disadvantages in available income and time, and ability to share responsibilities and take breaks.

A distinct class divide plays in: 6 percent of college-graduate parents had nonmarital births in 2011, versus 60 percent of births to moms without high-school diplomas. For lower-income couples, marriage with all the trimmings – like a big wedding and a mortgage – is often a goal, but not one they can afford, even when kids arrive.

Because kids generally live with mom, unwed fathers are often portrayed as absent and uncaring. But in “Doing the Best I Can: Fathering in the Inner City,” sociologists Kathryn Edin and Timothy Nelson argue that, like moms, unmarried dads treasure their relationships with their kids, even if they can’t be with them consistently. They’re not deadbeat. Many are just dead broke, underskilled and out of luck in the manufacturing downturn of recent decades. If they can’t provide, they often don’t get to be as involved as they’d like. Kids are expensive, and even middle-class workers with two salaries struggle. In America, among the biggest expenses is child care.

Though it feels personal, much of our family drama springs from the global marketplace’s reconfiguration of work – who does what, with what skills, for what pay and where. That includes the work of raising families, which is no longer just a women’s issue. Fathers need child care, too. Good teachers and caregivers are resources who help dads and moms succeed in educating the kids they love to be solid citizens and skilled workers, and sometimes in honing the parents’ skills.

The widespread lack of good, affordable child care negatively affects the way families form and fathers engage with their kids. If high-quality child care were part of the public education system, not the huge expense that it is for individual families (who pay a lot for even middling or bad care – think, Jessica Tata), dads and moms would face fewer financial barriers, giving all families more room to flourish and fathers more options to be the dads they want to be. Society would benefit from prepared kindergartners and a skilled, healthier, happier workforce.

Unlike most developed nations, the U.S. has not evolved support for families as economic realities have changed. Instead, our take has been: “It’s your family, it’s your problem.” No wonder fewer people want the job. A good, affordable national child care system would relieve pressures on dads and families across the board.

Fortunately, progress is afoot. In San Antonio, a new publicly funded city initiative is underway to provide good child care to 3,700 4-year-olds annually. That dovetails with President Barack Obama‘s proposed preschool initiative, offering Texas $308 million per year for preschool for all low- and moderate-income 4-year-olds, and parenting resources for the dads and moms of younger kids. It’s a good start.

We are our common wealth. Time to invest in Texas families and build the skilled workforce of tomorrow. It’s just what dad’s been wanting.