One of the nice things about being an older mom is the friendly comments you get: just this morning a 29-year old I’d just met remarked apropos of nothing in particular that I didn’t look 55. She hoped she’d look like me when she was my age! Maybe she was lying, though she had no reason to.

More likely she was just telling me that I looked a lot better than she’d expected, for the elderly mother of an 8 year old. It’s not hard to succeed in the territory of better than expected when expectations are low. Who am I to turn down a compliment? Anyway, I totally look better than the woman in the new campaign to get British women pregnant younger (aka Get Britain Fertile – yes, that’s the actual campaign name), sponsored by First Response fertility tests. Could they have published it to make me feel better by comparison? 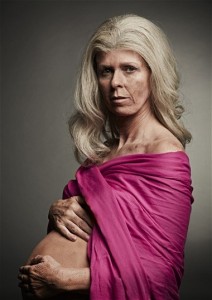 Per Think Progress, ”Get Britain Fertile ambassadors … insist that they are not trying to push women into a panic over their ticking fertility clocks.”

But I can’t imagine anyone being pushed by this photo to anything except to wonder: Why has that woman got dirt smeared on her face, looking like Nancy Sikes in a naked version of Oliver Twist?

One Britain-based friend (due to deliver her first child soon, at 32) called the ad “bizarre” and thought it might be linked to the fact that the National Health is now covering IVF for women up to 40 (in England and Wales) and 42 (in Scotland)—using their own eggs. The photo does look more like a money issue than an age issue – since the woman seems to be unable to afford clothing.  Maybe the Brits are worried about a growing national bill for later moms?

In the US, race is always a covert element in the negativity of the press around later motherhood (with an underlying fear of less educationally privileged ethnic groups and immigrants having kids younger [and therefore more of them, proportionately, at least in the short term]).

In the UK, the total fertility rate (the number of births the average woman would have in her life at the current rate) reached 1.98 in 2010 — up from 1.64 in 2000. Analysts attribute this rise to four factors: more young women having children, more older women who’d delayed also having kids, rising numbers of foreign-born women, who tend to have higher numbers of children than UK-born women, as well as “government policy and the economic climate.”  Clearly, low fertility is not Britain’s biggest problem.  Since immigrants are accounting for much of the rise in the UK too, I’d assume that is an issue for some folk there too.  And of course the “dirt” may also be read as code for the darkening of the national skin tone.

Quite apart from such concerns lie those that lead women to delay in the first place: basically, women’s earnings rise 12% (in the US and something similar presumably in the UK) for every year they delay their first child—and child rearing is pricey; many careers require a total devotion phase at the start; it takes people a while to find the right mate for the long term; it takes people a while to feel ready to settle down.  Telling them to start earlier or risk looking dirty, haggard or poor won’t address those real concerns.

The average woman has 1.9 kids in the UK, just south of replacement and not far from the US’s 2.06 in 2012 (per the CIA world factbook).  The average UK woman has her first child at 30 (in the US it’s 25.4, with 30 being the age for the average college graduate woman).  Thirty is not antique – but the higher average does involve a fair number of later moms – moving into the late 30s and early 40s with their own eggs and (in the US) into the mid to late 40s and 50s with donor eggs.  The set of later moms includes the woman in the photo, Kate Garraway, who had her children at 38 an 42 and who without the make up looks like this, at 46: 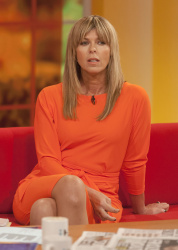 Since she’s a TV personality, most folks know she doesn’t look like that Nancy character, and that they won’t either when they’re 30, 35, or 42. And given that they’re likely to be much better off if they wait than if they’d started sooner, they and their kids will be able to afford decent clothing and the occasional bath.

That doesn’t mean that they might not have fertility issues, at whatever age they start. But most have good odds through 40, and if it doesn’t work they might try out the IVF, or adoption. Or they might just spend more time with their nieces and nephews.

The way to address the complex intersections of fertility /economy /workforce /romance /commitment and gender equity isn’t to insult the intelligence of the women you’re trying to engage. Give them the full facts, and if you really want to shift the pattern, offer more support to move society toward true gender equity in work and in policy-making roles. (As it is, delay of kids is the only means women have to forward that agenda.) Then leave it to women and their partners to decide for themselves what makes most sense for them and their families. They will anyway.

A shorter version of this post first appeared on Mothering in the Middle.

My second post on this topic appeared in the UK on June 25, 2013, on The Conversation.