Here’s my Point/Counterpoint piece on the Texas Equal Pay Act in this Saturday’s Houston Chronicle. 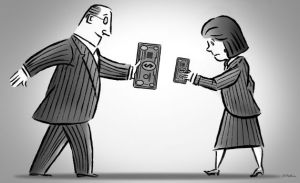 This year’s elections are all about pay equity. At both federal and state levels, the debates may have different names (Affordable Care Act, pay discrimination, education, birth control access, jobs creation, voter ID laws, human trafficking) but they all affect how much money ends up in whose wallet and how that “who” differs by gender, race, class, age and state.

The current debate over the Texas Equal Pay Act, legislation that Gov. Rick Perry vetoed last year, is just one tip of the iceberg – but important, both for the specifics it addresses and for the attitude it signals.

While this bill’s provisions can’t guarantee that all people are paid equally for the same work, it would fix some discrimination and would supply incentive for employers to aim for equity. With that on the books, more bills would follow to level the playing field for all Texas workers, to the benefit of business and the state as a whole. Striking it from the books marks the state as a civic throwback with no sense of the workforce needs of the very employers it seeks to attract. To recruit and retain good female workers in all job categories, Texas needs to be up-front on equity. Equity is a basic need on the home-front as well, as wage discrimination costs not just women but the whole family.

Backstory: The 2009 federal Lilly Ledbetter Fair Pay Act fixed a problem introduced by a U.S. Supreme Court ruling that found the law only allowed suits within 180 days of the first discriminatory paycheck, even if the victim didn’t know of the discrimination until later. Given that some laws also make it illegal for many employees to ask about their co-workers’ pay, this is a very cynical interpretation, ensuring continued discrimination. Before the Ledbetter decision, it was assumed that every discriminatory paycheck was a new offense and that a person had 180 days from every such check to file suit. The Ledbetter Act didn’t break any new ground – it just returned us to the status quo ante, by specifying that every new discriminatory paycheck is indeed a new crime, one that can be sorted out in federal court.

Texas law parallels the Supreme Court ruling. In other words, lawsuits are allowed only within 180 days of the first discriminatory paycheck, an injustice that state Rep. Senfronia Thompson, D-Houston, sought to remedy in the 2013 legislative session. Thompson’s bill, HB 950, passed with bipartisan support and would have allowed women to sue their employers in state court within 180 days of the most recent discriminatory check. State courts are considered better for plaintiffs because federal court dates are harder to come by. But Perry vetoed the bill, an action advocated by retailers such as Macy’s and Kroger.

While equal pay sounds like a basic right no American would question, we all know our economy was built on unequal pay. Like race, gender has historically also been a work-stratification system – both in terms of the kinds of jobs people are trained for and assigned and of the level of pay. Women’s employment long was defined by what they were already doing at home for free – bearing and rearing the workers. As women moved into paid work, they found that the only jobs available mirrored their home work, and their pay echoed the cheap home rate, too, because their labor was seen to be just “worth less.” Paying them less also had the ancillary effect of keeping them “too busy” to do much else than work extra hours to make up for the lost wages.

Gradually, as women have trickled up into policy-making roles, things have changed, and nowadays not all women get pushed into low-wage occupations, though many still do. As more women move into the statehouse and the so-called C-suite of top executives, equity increasingly is discussed, where before it was ignored. It matters who’s in the room when policy is made.

All players in Texas’ mid-term election have endorsed the principle of pay equity. If they mean it, there’s no good reason not to give that principle teeth and enact the Equal Pay Act. Discrimination is illegal. And while equal pay might cost some employers more in the short term, in the long term, all employers benefit from the rising tide of purchases made by employees with more money in their pockets and from the rising tax base that supports Texas business infrastructure. As gubernatorial candidate and state Attorney General Greg Abbott recently has learned, discriminatory pay is widespread, and only by giving laws teeth do we motivate employers to rectify their inequities and avoid lawsuits. We do have an amazing community of skilled and innovative women leaders in Texas. But we also have lots of work and thinking still to do around how to allow more women and men to choose their professions based not on stereotypes but on actual skills and propensities, and to reconsider why certain “female” jobs are paid so little to begin with.

It’s time to remove the external obstacles to women’s success in the workplace and move Texas toward a new era of prosperity through equity.