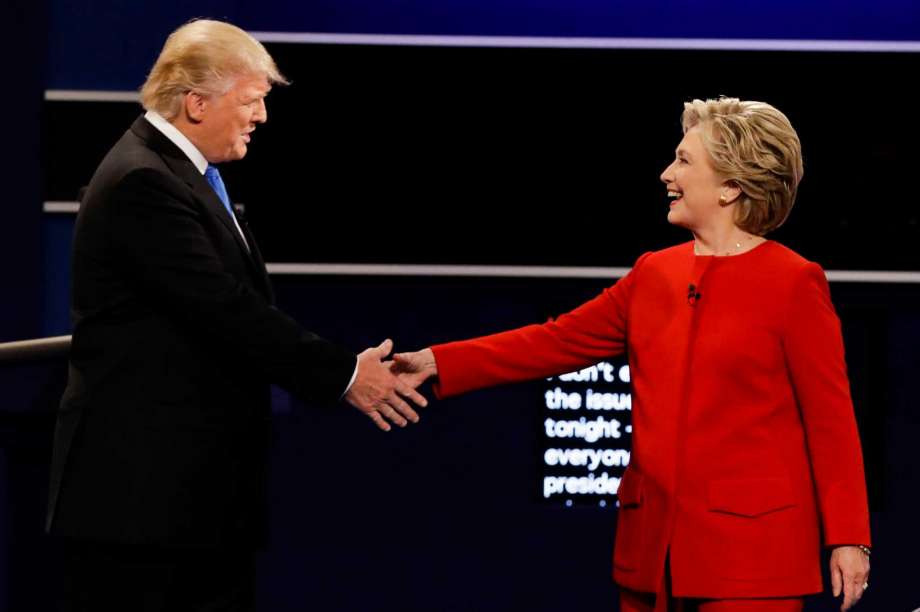 This essay first appeared in the Houston Chronicle.

I teach Gender Studies, and there’s never a shortage of material. It turns out life is a Gender Studies course, and we’re all in this class together. But lately, even more so.

For the first time ever, we have a major party female presidential candidate, Hillary Clinton, and her opponent, Donald Trump, can’t resist performing a burlesque of old-school woman-bullying techniques. For instance:

Interrupting and talking over her (51 times in last week’s 1.5-hour debate),

Complaining about her “not presidential” looks,

Rating all women on looks (“not a 10,” “Look at that face! Would anyone vote for that?”) and fat-shaming them (“Miss Piggy,” “disgusting!”) – with a clear double standard for himself,

Blaming the wife for her husband’s past infidelities (“If Hillary Clinton can’t satisfy her husband, what makes her think she can satisfy America,” he really tweeted) – convenient for a self-confessed serial adulterer,

Asserting that women who have abortions will face “some form of punishment,”

Too bad for him, laying this behavior on thick won’t send his target home crying anymore; everyone now recognizes these moves as attempts at intimidation.

And then there are some still on the fence, often for reasons not so much to do with policy, but because they don’t “like” Hillary.

If you’re one of those voters who prefers Hillary on policy but still has qualms – before you vote against her on reputation, could you be under the influence of some old-fashioned misogyny yourself?     Consider this checklist:

Do you question whether women can lead? (Should we give one a chance before we decide, as many other countries already have done? Angela Merkel, Margaret Thatcher, Indira Gandhi and Golda Meir come to mind.)

Are you willing to cut the male candidate slack for his behavior as a person and/or in business, but you hold the female candidate to a higher standard?

Do you think that 68-year-old women are less vital or less interesting than 70-year-old men?

Do you think women are too emotional? (As you ponder that, consider, too, which candidate most often has displayed the thinner skin.)

Does your feeling that you “just don’t like her” link to a sense that women shouldn’t be assertive?

If you answer yes to any of these questions, then misogyny, which Merriam-Webster unflinchingly defines as “a hatred of women” – recast here as a doubt about women’s capacities (and by contrast, a sense that men are just better and more worthy) – is in play.

For ages, the world embraced this set of perceptions. But the old gender rules don’t make sense in the modern economy. As women have become educated, our nation has expanded its talent pool. We now look for the best person for the job – mostly. That opens up doors for millions of young women and men who can now flourish in occupations formerly barred to them.

But in some spheres old biases still rule, the realm of leadership in particular. While middle-management jobs split evenly, the gender gap persists among leaders in business and government. Women are 51 percent of the population, but only 4.6 percent of CEOs, 19.4 percent of Congress, and zero percent of our presidents, ever.

We’ve heard lots of ideas on why women haven’t trickled up into leadership, including: active harassment, old-boy exclusivity, systemic family unfriendliness, lack of ambition and lack of role models.

Whatever the reasons, the leadership gap is a bottleneck to positive change and to the unrolling of democracy. Without more women in leadership roles, you’ll never know what insights and positive innovations they could introduce, both as individuals and as members of a group with a different perspective. Young women will be less inclined to even make the effort to lead, or to learn how to prepare to lead, when they see capable females rejected time and again.

If the female candidate loses this election only because we as a society decide we still don’t feel comfortable with female leadership, our daughters and granddaughters, sons and grandsons will feel those negative ripple effects for years.

Whatever your politics, unless actively keeping women out of leadership is your goal, take time to make sure you vote for whoever you think is the best-qualified candidate, with the best ideas for our nation – without gender bias. Whatever your views, and especially if you’re on the fence – check your misogyny, at the polling place door.

This essay first appeared in the Houston Chronicle.