Here’s my entry at Daily Beast in this ongoing debate about America’s work/family misery. Looking past stating the problem to fixing it! We can do it!

How Women (and Men) Can Have It All–Now 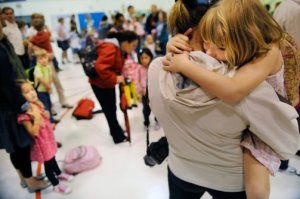 Thanks to Anne-Marie Slaughter and The Atlantic for making the opening that finally brought the misery of our family-unfriendly work world to the national discussion and the front page of The New York Times. But contra her characterization of the status quo as a problem that can only be addressed in the long term, there are obvious immediate policy solutions to the problems of women’s work/family lives, which Slaughter’s piece and the subsequent discussion have largely ignored (an exception).

These involve embracing educational and workforce policies that would benefit families at all levels, from elites through middle management to clerks and hotel workers. And further, electing the leaders who will enact such policies. The time is now, and those leaders are progressive women and their male allies.

First, education. Lately, we’ve been cutting education to the bone, and cutting our future off at the knees. Cuts to education means no competitive workforce of tomorrow. They mean no informed voters, no democracy, and big-time decline of everything we value and enjoy. There are many ideas on how best to implement positive change, but it all starts with paying a sufficient number of good teachers a decent wage.

As we reinforce K-12 education, we must also expand educational offerings to include kids up to age 4. Currently, millions of children sit in front of TVs for the first five years of their lives—either at home, or in bad child care (because that’s all their parents can afford). No thoughtful interchanges, no challenges to figure things out for themselves, no active play. Add to that a lot of sugary, fatty food, and you have a formula for failure.

Even the best elementary ed is bound to fail kids who enter kindergarten completely unprepared. The damage has already been done. A good, affordable child-care system would provide the fix. A decent education is a nation’s obligation to all its citizens. It would cost money—just north of 1 percent of GDP by one estimate—but the investment would pay off in savings on prisons and in increased productivity and engagement.

If such long-term benefits are not enough of a positive for you: child care is also an immediate jobs engine. Thousands of well-paid jobs would be created for teachers in the centers, for construction workers to build the centers, and for those who teach the teachers. The effect is multiplied when these well-paid teachers spend that money at community businesses.

A national child-care system would benefit us not only in the future but in the present, by freeing today’s grown women, of all classes, to participate more fully in growing the economy. It would do this both by making good child care affordable and, also important, by countering the current guilt-inducing media coverage that misrepresents child care’s role.

Part of the reason our culture still distrusts child care so reflexively is that so much of what is available now actually is bad. But good child care is a different animal, and its wide availability would change attitudes—both toward the care itself and toward the sense of a mother’s relation to care. It would move us toward a wider openness to sharing care—with both paid caregivers and with dads.

To work for all citizens, good care has to be subsidized—or, to phrase it more clearly, invested in by the nation, through a collaboration of taxpayers and employers. That has been the case for Head Start and within our military child-care system, and it is the rule in many nations around the globe, but has not been an option for most U.S. kids. Thus millions of working moms and dads have to put their kids in bad care, full or part time. They lose, the kids lose, and we all lose, because the American workforce ends up enormously underskilled.

Good child care has much to offer kids in terms of socialization, range of activities, structured environment, and skills development, especially if it’s combined with flexible work arrangements that allow parents to cut back on work to be with kids when needed.

A major national attitude change toward valuing the work of child rearing—including the combination of good paid child care and reasonable work rules that allow parents time to be with their kids while still working well for their employers—would improve all our children’s lives. It would also make having children an option for many who don’t see it as one right now.

Along with child care, we need policies that support women and families at all levels. A key step in this direction would be a mandated paid leave for both parents. Data from abroad indicate that such leaves narrow the pay gap between men and women. When men are also required to take leaves, the gap disappears, because employers can’t anticipate that women will be less reliable workers than men and so will not invest any less in them. Also key are paid sick days for the vast network of hourly workers who currently have none and who often lose their jobs when they have to stay home with a sick child.

Critics might say I need a reality check here, that I’m talking pie in the sky, and that policies like these sound especially ridiculous in the current economic and political climate of cutbacks.

That’s where elections matter—not down the line, but here and now. These policies haven’t been taken seriously because there have not been enough women in policy-making roles or with the financial or cultural clout to insist that they be taken seriously. Circularly, as Slaughter indicates, because the support infrastructure hasn’t changed, women haven’t been able to move in sufficient numbers into positions where they could change it.

While some businesses have recognized the value of family-friendly policies, and while increasing numbers of men have begun to agitate for more time with their families, it’s still seen as a women’s issue, and that has effectively meant that it could be ignored. Like John Adams who famously disregarded his wife Abigail’s enjoinder to “remember the ladies” as he went off to write the Constitution, our male representatives have largely failed to facilitate change on behalf of their female constituents.

Women now understand, as did our revolutionary founders, that direct representation matters. Only when there is a critical mass of educated women with clout in Congress and in positions to influence Congress (which means with money and votes) will U.S. policy come to reflect women’s interests.

That time is now. For millennia, women were deprived of active participation in democracy by their uncontrolled fertility, which left them no time to gain the education that would lead to influence and policymaking power. By allowing women to postpone children—an evolutionary step—birth control now allows us for the first time ever to participate in the shaping of national priorities as full, directly represented citizens.

Finally, even the trickle up of women into power is making a difference. Though currently only 16 percent of the Congress is female, there’s big room to expand that in November, and constituents can require their male representatives (many of whom are already supportive) to collaborate with their female counterparts. A small but vocal minority of representatives with right on their side and, incidentally, a majority of the electorate, can change the world.

The current war on contraception and abortion is a coordinated effort to stem this tide and to keep the power in the hands of the patriarchs. It’s no coincidence that the big money fighting women’s reproductive rights is all male (or that very few women have that kind of money to spend). But though they look powerful, these geezers are late to this pushback. The huge cohort of college-educated women with high expectations and the interests of the nation at heart has the political muscle to fight back now. If we don’t use it to protect real democracy for those who come after, everybody loses. Our daughters most of all.

Next step? Push back more—with votes, with money, and with plenty of back talk! Elect progressive women this November by working in and contributing to their campaigns. Female candidates won’t agree on everything, but their presence in the race will change the discussion in ways that will make what used to seem impossible suddenly look doable. It becomes harder to forget women’s concerns when they’re there in the same room, voting for themselves. That also makes it easier for our allies, the new-school fathers, to do what they too know is needed.

Though we’re not all the same, we have a lot in common and a lot at stake. Time to put to good use the suffrage and the education that our foremothers of all classes and colors worked hard to win us. It’s our turn now to stand together. Ladies, let’s roll.

Tagged on: Anne-Marie Slaughter    childcare    How women (and men) can have it all now